The primary focus of our group is on atomic-scale magnetism. We study structures composed of individual magnetic atoms, assembled by means of atom manipulation. In order for the spins of these atoms to be as much as possible separated from the outside world, we position the atoms on thin layers of insulating material (e.g. MgO or Cu2N) on top of a metal surface (e.g. Ag(100) or Cu(100)).

The STM image below, which is approx. 30 nm wide, shows an island of Cu2N (purple) on top of Cu(100) (orange). Scattered across the surface are Fe atoms (yellow protrusions). On the island, groups of Fe atoms are assembled into various structures. Depending on the relative positioning of the atoms, their spins can couple ferro- or antiferromagnetically. Also, by adjusting the spacing between atoms, the coupling strength can be tuned over several orders of magnitude.

We have several methods at our disposal to investigate the spin states of these atoms. The most well-known is spin polarized STM (SP-STM), where different magnetization orientations of the spins result in different conductance values. This technique allows us, among other things, to determine the magnetic lifetime of atomically assembled bits. Another commonly used method is inelastic electron tunneling spectroscopy (IETS), which provides information about the energies and associated probabilities of discrete spin excitations. Together, these techniques enabled the experiment visualized in the figure below, where we studied the role of spin wave (magnon) excitations in the magnetic switching rate of a ferromagnetic bit composed of six atoms (Spinelli et al. 2014).

In recent years, our group has adopted the methodology of electron spin resonance STM (ESR-STM), developed in 2015 by Baumann and coworkers. In ESR-STM, a radio frequency (RF) signal (typically in the ~10-20 GHz range) is sent down to the STM tip. Due to a piezo-electric response mechanism of the surface, the resulting oscillating electric field is locally converted into an oscillating magnetic field, felt only by the atom directly underneath the tip. This, in turn, sets up a Rabi rotation of the atomic spin, resulting in a change in the spin-polarized conductance only when the drive signal is in resonance with the precession of the spin.

ESR-STM provides tremendous resolution in terms of energy, but it still gives an ensemble-average in the time domain. In order to also gain insight into time evolution, we perform pump-probe spectroscopy. In a pump-probe experiment, two pulses are sent in rapid succession: one to initialize the spin and one to take a snapshot of its magnetization after a set delay time. As described in 2021 in Veldman et al., this allows us to trace the coherent dynamics of coupled spins with nanosecond precision.

As an additional probing technique besides STM, we also implemented qPlus non-contact atomic force microscopy (AFM), originally developed by Giessibl, into one of our systems. AFM separates structural from electronic information, which may give us new insight into the exact driving mechanism of ESR-STM. In addition, as AFM does not rely on a tunnel current, it allows us to explore non-conductive substrates for our spins, which are believed to offer much longer coherence times.

We have two low-temperature STM systems at our disposal. Both systems operate in ultra-high vacuum (UHV) conditions and were recently upgraded with high-frequency cabling. 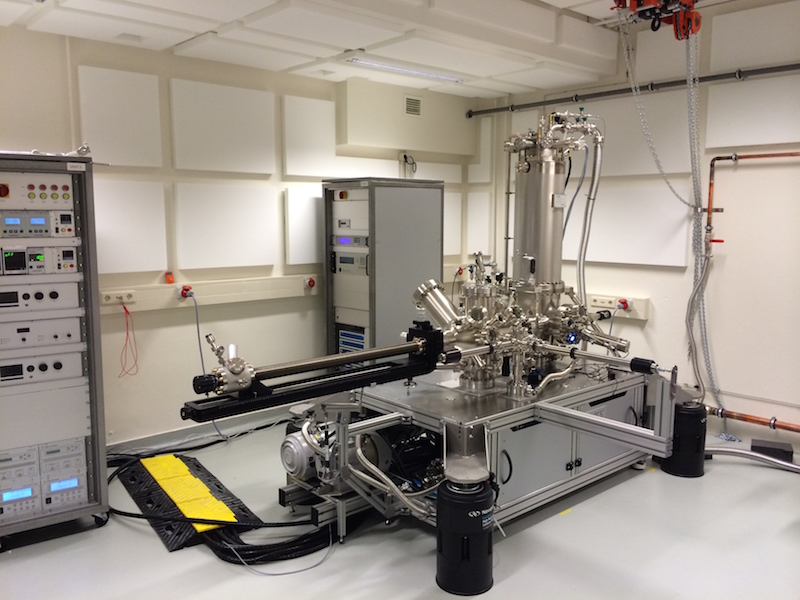 Our JT system provides both STM and qPlus AFM capabilities. The system features a large scan range and multiple contacts on the sample stage. 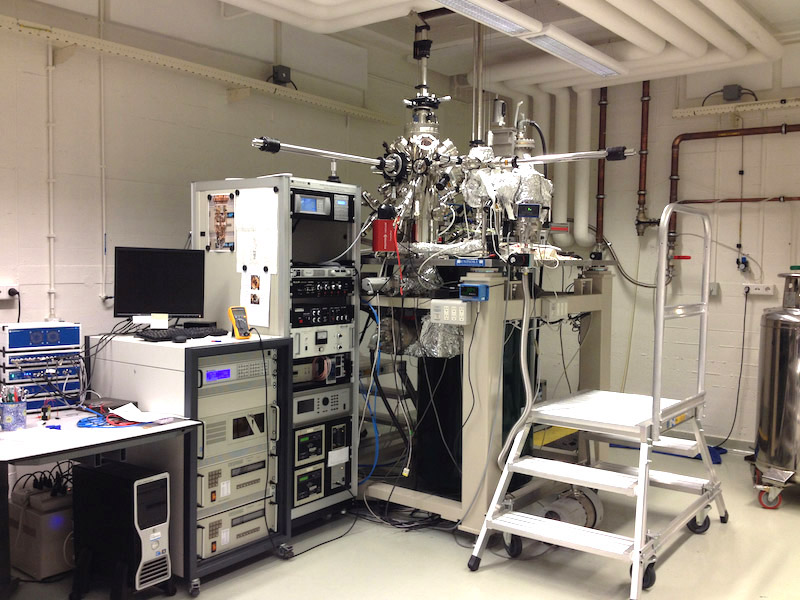